Wow, everyone has given me a lot to live up to. So here goes!

I was hunting around for some inspiration for my new hero, Dylan. He needed to be cool, sexy, creative and a little bit bohemian. So last weekend, I was watching Crybaby. How could I go past Johnny Depp? Johnny is a fabulous actor and a true chameleon. Perfect inspiration.

I'm not just inspired by contemporary hunks. Some of the golden age film stars are very inspiring. In a comment this week on the blog, I said that I'm attracted to a nice smile. Just check out Clark Gable's cheeky grin and those eyes in that last photo. My mum took me to see Gone with the Wind when I was 13 and I've loved Clark Gable ever since.

Now this strip of random spunks came from a website called Water, Water Everywhere which I think Sandie put me on to. It should be in the Favourites of every romance writer. Plus it links to a couple of other great sites.

I haven't heard of most of these guys before (except Josh Holloway) but found them by clicking on random links on this great website. So from L to R we have:
Barry Watson, Dustin Nguyen (for Kiki), Gerard Way (for goth inspiration), Aaron Beas, Josh Holloway, Markus Schenkenberg (for shower scenes), and Lucky Vanous (the eyes had me). Maybe one day, I will google these guys to find out who they actually are -- but for now just enjoy the perve!

Wow what a week of hunks. Definitely a lot of scope for heroes this week. I've found that the inspiration for my heroes always comes from the movies. I think that for me it is just not the package (with the exception of Hugh Jackman and Pierce Brosnan - total drool material), but the character - their mannerisms, behaviour, humour etc that are what do it for me. 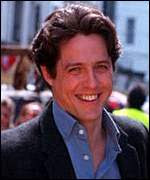 Take Hugh Grant. I don't find him attractive at all out of a movie - and he definitely doesn't have a great bod. BUT stick him into a romance and, yep, he's won me over. Think Notting Hill/Love Actually/4 Weddings and a Funeral.
In fact it didn't really occur to me until I sat down and thought about it, but in a lot of the great romance movies out there, you really don't see a lot of flesh. The heroes in many of these use the character's inherent traits and the romance to win over the audience. Of course, the leading men are never ugly - although not neccessarily handsome in the traditional sense, eg Owen Wilson (Wedding Crashers). 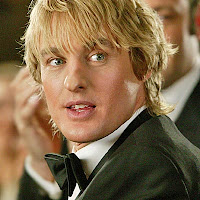 A lot of period romances have the heroes dressed in layers of clothes, and yet you still fall for the leads as much as if they were flashing their abs. And of course, this gives me a chance to include a little Hugh - the Aussie one ;o) (Kate and Leopold).

I think in developing my heroes, I pick a leading man who has played a character that has elements of my hero. I have a hero based on Gerard Butler - thanks to PS I Love You - probably the most romantic movies I have ever seen. I would never have used him as my leading man if it hadn't been for his character in that movie.

Movies keep my heroes ageless. Wouldn't take a second look at Michael Douglas, but what a hero he made in the Romancing the Stone/Jewel of the Nile flicks.

Well, I think you get my drift. So to finish off I thought I would leave you with a collection of my favourite leading men. (Pierce, Hugh and Colin)
Anita :o) 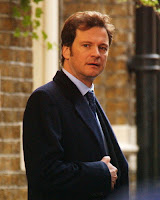 So what makes a man? Is it his clothes? His mannerisms? His intense sensuality which you know will lead to overindulgence of the naughty kind in the bedroom? His wallet?
When you see a man, what's the first thing you notice?
His smile
His body
The way he walks/carries himself
Whatever it is, you'll find that a lot of other women feel the same way.
For myself it's the smile, then deportment (this is before he starts talking), then body proportions (of the external kind ladies, external only - as in clothed).
I like a guy who looks healthy and happy. Brooding hunks don't really do it for me. I mean they're nice to look at but they come with too much baggage. Give me a healthy, happy guy anyday. So on that note I'll introduce you to some of my favourites. 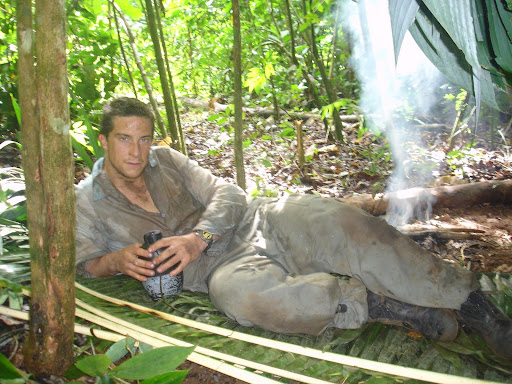 Right now we'll start with Bear Grylls - English adventurer, ex-SAS.
If you need to survive in any jungle this is the guy you need for the job. I was going to include the naked shots but I thought some of the girls might not be able to control themselves. lol.

Okay next man on the rank is Gerard Butler, lovely, lovely abs of steel. But more importantly, he's a happy guy, who has a great sense of humour. Now I know there's a thousand and one photos of him, some very sexy pictures, but I like this one.

Okay another hunk who catches my eye? Strange but I really like the look of Robert Downey Junior from IronMan, just really a good look and the guy has a wycked sense of humour...

So all my men are starting to look the same you say.
Not so I proclaim, although yes they have dark hair - it's a phase

I do have to include my friend Barry Eisler. Yeah I know it's not technically stalking....

so all these men have differing looks. But they're all linked by good sense of humour, great smiles, mischieiousness - you just KNOW they're thinking wyckedly, and they're all accomplished. Gerard sings, he played The Phantom of the Opera (woohoo, he can sing me to sleep, or whatever). Bear has survived in the most rugged wildernesses, and done a stint training with The French Foreign Legion. Robert is just a wonderful actor, some of his roles lately have been fabuloso.
And Barry, former CIA agent/lawyer etc is an accomplisher author.
All these men have achieved highly in their specialised fields.
But there's one even greater then they all.
A man who is unique in the universe.
A man who gives his all time and again and never receives credit, humble, great sense of humour and decidedly Wycked!!
The Doctor! 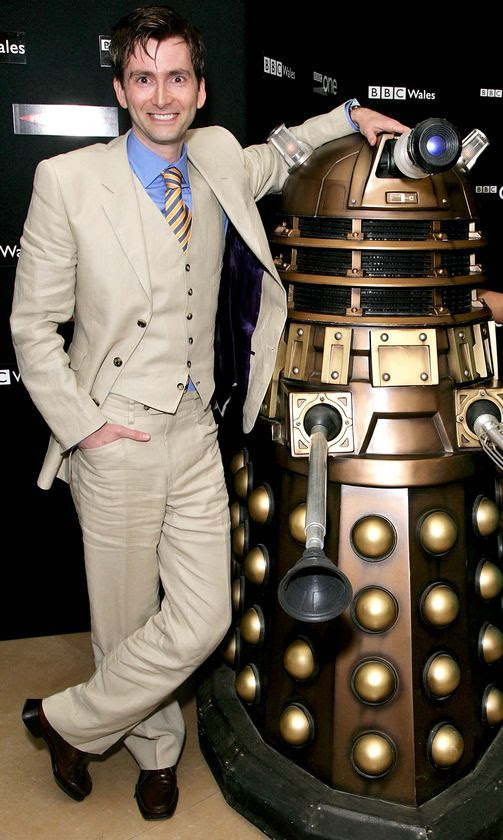 Oh all the other males in the universe pale in comparison...

Doesn't he just do it for you? Wrowlllllll
Posted by Natalie Hatch at 9:20 AM 4 comments:

Now I'll admit to being partial to a man in jeans. I'm a butt girl at heart and it's the first thing I saw of my future husband when we met. Well, we didn't actually meet, he was walking out the door and I just watched him. LOL

There's another thing I should confess to. I have a serious thing for cowboys. I don't get it, maybe it's the jeans but give me a story with a cowboy or two and damn! As my CP, Mari Carr would say, it just melts my butter. So I thought I'd share a couple of cowboys and a couple of hot guys in jeans. 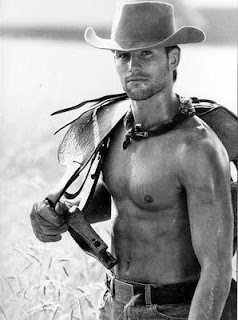 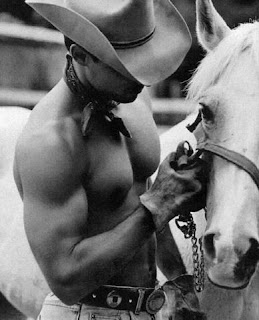 Now this guy just makes me think of dancing. Don't know why but he just looks like he's got all the moves going on. And really, who wouldn't be up for a little two steppin' with him? You'll have to wait your turn though, I'm in line first.

And one more just because I like cowboys. I did warn you. 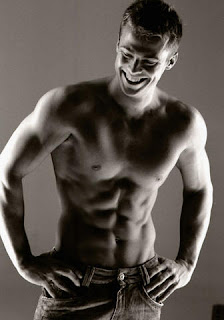 Well now, a dock worker, maybe? I like this guy, he hasn't told me his name yet but you know I'm looking at him now and thinking that little piece I wrote the other day just might be about this guy and if it is... well, let me introduce you to Dave. He's part owner of a construction company. They're having problems with sabotage on the work site but that's the least of his worries because his new head welder, Cal, just happens to be a woman. 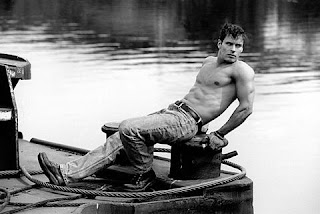 And this guy? Well, I figured I'd do my bit for the worsening energy crisis and the global warming thing and find out about wind power. Of course I needed someone to tell me all about it. And I do believe he's up to the job. 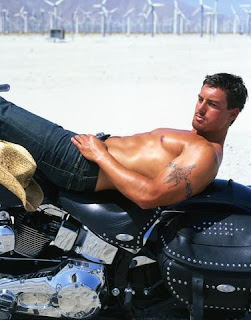 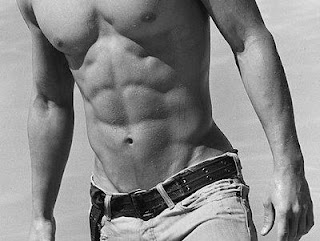 Now the above pic just has my mouth watering and my tummy fluttering and you know the jeans slung low, that tantalizing V over those yummy hips and damn if I wouldn't just love to run my hand up that washboard stomach. I might even spend a little time checking out those pecs.

So now that I've succeeded in getting myself all hot and bothered I think I might go and play with Cam. I'm thinking Laney just might have that boy performing a little strip tease for her.

I know I’m late with this, but I’ve been to Sydney today with my son. Will blog about that over on my own blog. Anyway on with the show.

Heroes, we all look for different things in our heroes. I think it is like the men we are attracted too. For me I love the rugged type. The cowboy/jackaroo, after five shadows, their hair a little wild and un-kept. Why? Because that is my husband to a tee. I admit not all my heroes carry all these traits but they all carry at least one of them. 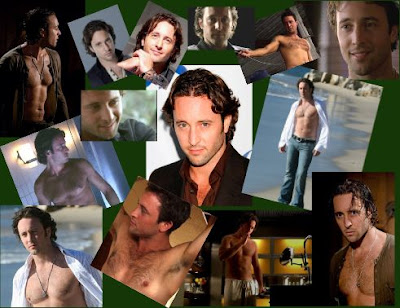 For my NaNo project, I had to find the right person for my hero. Someone I could picture in the 1700’s which is why I choose Alex O’Loughlin for Shep Freeman. Okay I saw him in Mary Bryant and fell in love with him; he had it all as far as I was concern. Plus his role in Moonlight, as a vampire was hot.

I’ve added a few banners of my up and coming heroes. Of course, I’ve selected photos of them with their shirts off. When I need inspiration, a shirtless guy will do it every time.

I know it’s sad, and it can at times be a dirty job, but someone has to do it. LOL.

And then there are my current heroes. What I normally do is make up a collage of photos with my hero and heroine, as well as houses, streets, beaches and the country side anything that I have a site or scene in my story. I even have a few of the secondary characters. I love the visual effect. I may not be able to work off a plan but I can off photos. It’s just as well as my hubby isn’t the jealous type. LOL. 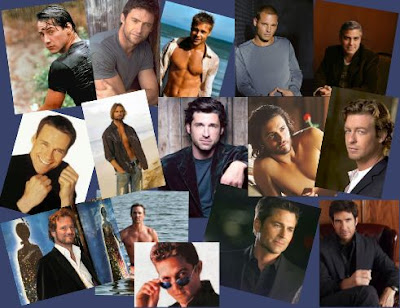 Hope you enjoy my pictures and you find some inspiration. I have a feeling by the end of the week we are going to be rearing to go come November. Hehehehe.