when everything is breaking... 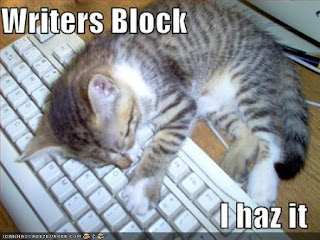 Since the beginning of June, everything is breaking on me. Today after doing my Telecross calls, I thought I would get a head start on the weekend chores, throw some stuff into the washing machine, and then slip back into my warm bed to catch up on some much-needed sleep. The washing machine would not come on at all. I guess I've been in this house for 4 years, and the machine has been here longer, so it's feasible that it's died. But why couldn't it wait until I'd moved out?

So I went back to bed in a sulk and stayed in bed much longer than I'd originally intended. Cold winter mornings and I do not agree. When I finally got up and had a shower, I threw my clothes into the bathtub and used a broom to agitate them.

Other things that have broken in the last few weeks: my radiator hose, the whole computer system at work yesterday, and I somehow managed to ban myself from the RWA chat room last night.

So what do you do when your manuscript is broken? During the 50ks in 30 days challenge, whatever else you do, don't panic. Don't delete words. Don't go back to fix it. You need to keep moving forward. Even if you're standing on the side of the road in the pouring rain, refilling your radiator - a solution will present itself (it did: a bloke in shining armour fixed it on the spot).

If the scene didn't work the first time you wrote it, don't delete it. Never subtract those precious words. Rewrite it but count those words as additional words. Every word towards the 50k challenge is important, and once its written you do not erase it from your word count. If it needs to be erased later, when June has passed, go right ahead.

Don't beat yourself up if you've turned off the highway and ended up in the middle of nowhere. Lost? Possibly! But there might be a reason that your story has taken a turn up that road and just a few more paragraphs will reveal something you would have missed if you'd stayed on the highway.


But what if your characters are on strike and no longer talking to you? You need to coax them out. Sit down and chat to them. Find out where they think the story should be going. Or pull a negative psychology trick on them, and start writing about the next characters who are waiting in line. Or give your focus to a secondary character and make your primary characters envious. Write a scene from a non-POV character - especially one who has not been revealing much -- and find out what is really going on in their mind.

There are lots of tricks when the writing is broken...but the main one is keep writing. Even if you have to write out a load of rubbish first, eventually the good stuff will come.

May the rest of June be very productive and you all reach your goals. See you in the sprint room (now that I've unbanned myself).
Posted by Diane at 6:47 PM No comments: 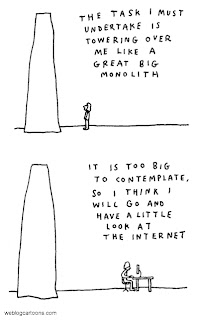 9 days down - and with them the excitement and enthusiasm that carries you over the wave that is the first week of 50k in 30 days. If you are like me, your word count is shaky, your momentum slowing and the pressure is on.

One third of the way there. How do you keep up the effort of producing such high word counts day in and day out? The next 10 days are the hardest - the fun and excitement has dulled, and the thrill of the end too far away to see.

I thought I'd share some tips for staying motivated to write from successful writers (courtesy of the adventurous writer):

I'll finish with my tip - an oldie but a goody "You can't edit a blank page". Forget editing, this is your time to make a dirty draft. Get the words there and you have something you can work with.

Okay, now stop procrastinating, keep your bum in the chair and get writing :o)
Posted by AJ Blythe at 6:00 AM 2 comments: